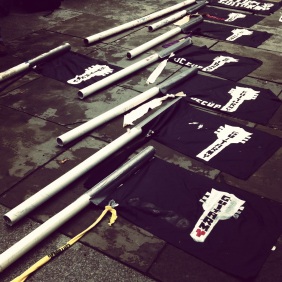 Clockwise from top left: A group of police officers stand outside Crate and Barrel in SoHo during Occupy Wall Street’s General Strike on May 01, 2012. A row of flags for Tom Morello’s Guitarmy lay on the ground in Bryant Park during Occupy Wall Street’s General Strike on May 01, 2012. A flutist performed her solo recital in the Mannes Concert Hall at 150 W. 85th St.. One attendee of the Rally to Restore Sanity and/or Fear stood on his van to distinguish himself among the 215,000 people gathered on the National Mall on October 30, 2010. Ron Paul speaking to a crowd of over 1,800 at Webster Hall on September 26, 2011. All photos for The New School Free Press.